Almost everyone has played the classic board game Candy Land while they were kids. But how good is Candy Land as a board game for autistic children?

I summarize some of the good and bad features of Candy Land below as they relate to autistic kids. You can then more details about the experiences of autism experts and parents with Candy Land in the next sections.

Characteristics that Make it Good for Autistic Children:

You can buy Candy Land from Amazon.

Before we talk more about whether Candy Land is suitable for autistic children, a short refresher course on how the game works is in order since you probably last played it when you were five.

Candy Land is a racing board game where players race around a winding track to find the lost king of Candy Land, relying on random chance to determine the winner. A deck of cards is also used, where each card represents one of several colors. The track is made up of various colored tiles, and players take turns grabbing the top card from the deck and moving their marker to the next space containing the chosen card’s color. The first person who lands or passes the final tile is declared the winner.

Playing the game requires no reading skills, very little counting skills, and a good amount of color recognition skills. This makes it a good game for young children. 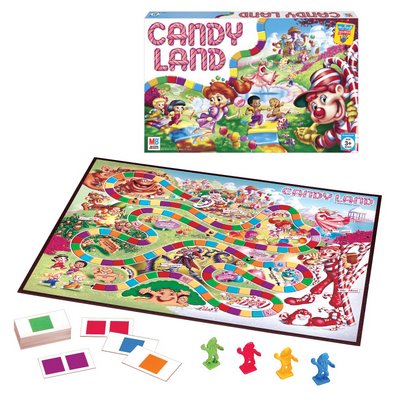 Autism expert Temple Grandin says that Candy Land is a good game for autistics because it teaches turn taking.

Candy Land is also a good game because it doesn’t rely on verbal communication–a common difficulty for autistic children–and instead plays to their strengths in visual recognition.

Autism Author and mother Susan Senator also writes that she had great experiences playing Candy Land with her autistic son. She began by helping him during his turn, using hand-over-hand to move his piece around the board. Candy Land helped Susan teach her son how to repeat out loud colors, which in turn kept him focused on the game.

Things to Beware Of

One thing to beware of if you decide to play Candy Land with your autistic child is that the marker pieces can be quite small and provide a choking hazard. This makes it not a great choice for low functioning autistic children who like putting things in their mouths.

Second, because many autistic children are attracted to logic, a game like Candy Land that relies purely on luck may leave them frustrated with their inability to control the outcome. You probably won’t be able to know this unless you actually try playing the game, but knowing how well your autistic child controls his negative emotions can give a clue to how he would react to playing Candy Land.

Third, Susan Senator notes that Candy Land often forces the player to return to start. This can be problematic for kids with attention difficulties. She suggests changing the rules to suit your child if this is the case.

Candy Land seems like a great game to at least try with your autistic child, and if nothing else you can easily customize the rules of the game to fit your child’s situation. Parents–what have been your experiences with Candy Land? Please comment!